The easiest way to install xonsh on windows is through the Anaconda Python Distribution and the conda package manager.

Xonsh is not supported on legacy Python (2.7).

Install xonsh with the following command:

This will install xonsh and all the recommended dependencies. Next, run xonsh:

To install xonsh from source on Windows, first install Python v3.4+ from http://python.org. Remember to select “Add python to PATH” during installation.

Next, install the prompt_toolkit dependency via pip:

The dark red and blue colors are completely unreadable in Windows’ default terminal.

There are ways to configure the colors of the old terminal, but to give new users the best experience Xonsh has some tricks to fix colors. This is controlled by the $INTENSIFY_COLORS_ON_WIN environment variable which is True by default.

Windows 10 supports true color in the terminal, so on Windows 10 Xonsh will use a style with hard coded colors instead of the terminal colors.

The best option on windows is to use the new Windows Terminal developed by Microsoft as an open source project. The new terminal supports has many nice features including Unicode rendering.

It is highly recommended and can easily be installed from the Windows Store: 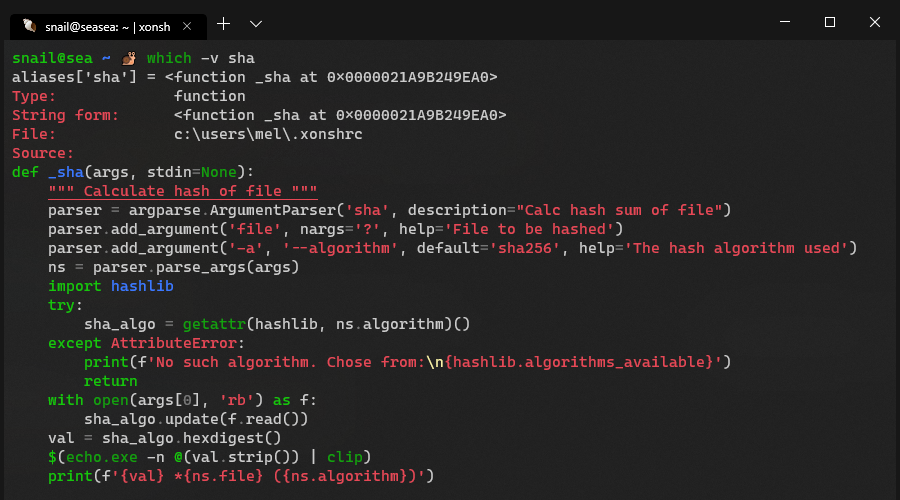 Python (like other processes on Windows) locks the current working directory so it can’t be deleted or renamed. cmd.exe has this behaviour as well, but it is quite annoying for a shell.

The free_cwd xontrib (add-on) for xonsh solves some of this problem. It works by hooking the prompt to reset the current working directory to the root drive folder whenever the shell is idle. It only works with the prompt-toolkit back-end. To enable that behaviour run the following:

Add this line to your ~/.xonshrc file to have it always enabled.

Due to ambiguity with the Python dir builtin, to list the current directory via the cmd.exe builtin you must explicitly request the ., like this:

Many people create a d alias for the dir command to save typing and avoid the ambiguity altogether:

You can add aliases to your ~/.xonshrc to have it always available when xonsh starts.

Python’s utf-8 unicode is not compatible with the default console “conhost” on Windows.

Luckily, Microsoft is developing a new Windows terminal as an open source project. The new terminal supports all the nice features of that you find in linux terminals. It is highly recommended and can easily be installed from the Windows Store: